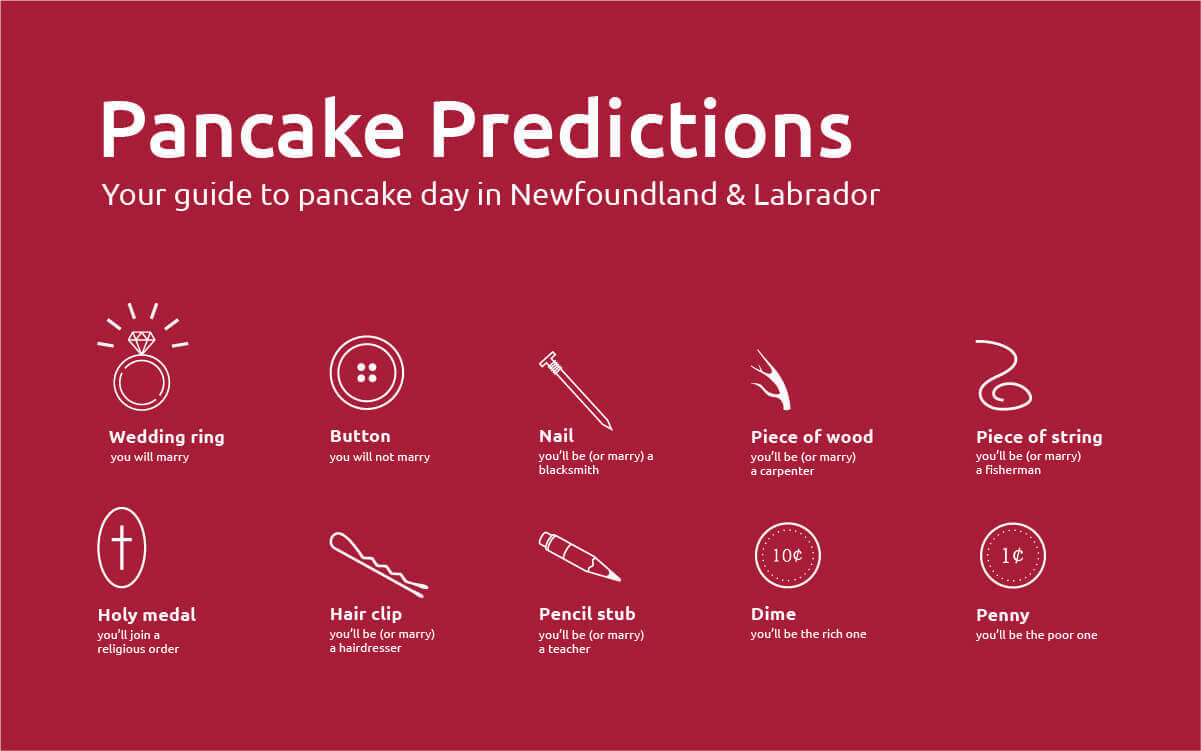 Pancake Day falls on the last Tuesday before Lent – the Christian tradition of giving up something you love for 40 days. Historically, many Newfoundlanders and Labradorians were Christian. This means many holidays or special events were based in religion, such as Lent. And on the last evening before Lent, it’s customary to eat up all of the fatty, rich, ‘pleasurable’ foods like meat, eggs, and dairy.

And what delicious, fluffy, food is made from butter, eggs and flour? Pancakes of course! Really got lucky with that one.

It doesn’t stop there in NL, however. We take it a step further and predict the future with our pancakes. Is it accurate? That’s up for debate. Treasures like coins or charms are placed in pancakes, and what you get in your pancake is your future!

What does the future hold?

So, what does one’s fortune tell them? It depends, of course, on what you find in your pancake.

Piece of string: you’ll be (or marry) a fisherman

Piece of wood: you’ll be (or marry) a carpenter

Wedding ring: you will marry

Button: represents bachelorhood meaning you will not marry

Penny: you’ll be the poor one

Dime: you’ll be the rich one

Nail: you’ll be (or marry) a blacksmith or a carpenter; in some families it means you were the next to die

Pencil stub: you’ll be (or marry) a teacher

Holy medal: you will join a religious order

Hair pin: You’ll be (or marry) a hairdresser

The examples mentioned are gender-based, because back then there were more traditional roles for men and women. Whether you would ‘be’ or ‘marry’ depends on your gender, and the gender associated with that role. So, a young girl getting a piece of string means she will marry a fisherman, while a boy getting a hair pin means he will marry a hairdresser.

As time passed, more children would see their parents taking on varying roles. Eventually, a young girl getting a piece of string meant that she could be a carpenter, too.

From Trinkets to Cash

A modern form of Pancake Day sees parents hiding coins in pancakes. The introduction of the one-dollar coin in 1987, and later the two-dollar coin in 1996, contributed to a shift in this culture. Children didn’t protest this evolution, as finding five bucks over a plate of pancakes for dinner is just as good, if not better, than knowing you might someday get married.

Happy Pancake Day, everyone. Breakfast for dinner is always a good day.

cancel search
Sorry, your submission has some errors that need to be corrected before you may continue.